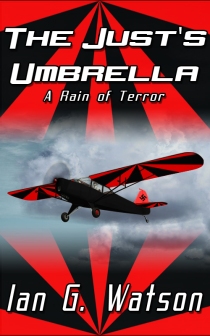 Most books are purchased by people between the ages of 40 and 60.

The largest target audience is the baby boomer crowd, born between 1946 and 1964. (Guilty!)

Spy thrillers have been popular since the 60s when James Bond was in his hay day. Television series such as Murder She Wrote and Columbo were favorites. Even just ten years ago Sue Thomas F.B.Eye was big news.

With the advent of CSI programs most common folk have an uncommon grasp of investigative techniques, police procedures and evidence collection. Even if your choice in reading material tends towards romance, paranormal or fantasy, a good who-dun-it will grab your interest on the screen.

If you elect to do the research there is evidence that some German scientists, both of the Nazi persuasion and those whose talents were held hostage by the regime, may have been whisked away to the U.S. and other countries to work for those governments.

Neo-Nazi forces still exist.  Chemicals and germ warfare agents developed during WW2 also still exist. The risk of them being used today is higher than you might imagine.

A new series of books by author Ian G. Watson http://www.iangwatsonauthor.com/index.html   will be introduced this fall and while I believe it will be of interest to all age groups I also suspect the baby boomers will be amongst his most loyal followers.

Ian was a young boy in England during the Second World War. He has extensively researched all aspects of it and has written a few light, comedic books about Churchill and events of the era. But he has turned his attention to the more serious and factual aspects of the time.

Set in the 1990s the Wren Series is about reality. It follows some experienced war horses, middle aged to elderly, still full of piss and vinegar, expert at old school intelligence gathering, and called into service once again for God and country. Most of the action takes place in Britain and the U.S. but they do hopscotch across Europe often barely escaping with their lives.

The first book in the series, The Just’s Umbrella, is due out by the end of October. Grab it! The second book, Sunless Treasuries, should hit the market in mid-November. If this is your genre, this is your writer!